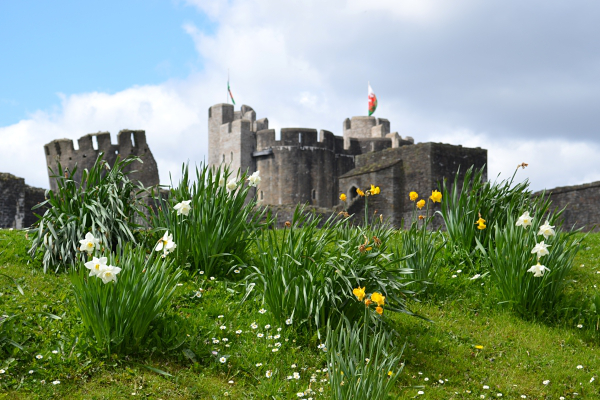 Wales might be small, but for its size it “hides” a surprisingly large amount of historic structures and ruins – from castles to cathedrals and Victorian piers. Far too many to list them all here, so I have picked 12 I have personally visited around this beautiful country.

This place is pure magic – especially if you manage to visit it out of the high season, where there will be fewer tourists around and more peace. The now ruined abbey was established from the beginning of the 12th century and extended and rebuilt through hundreds of years, before being destroyed by King Henry VIII. Today the ruins stand like a melancholic piece of history, surrounded by a beautiful natural scenery beside the River Wye – just a short bus ride from the town of Chepstow, where Chepstow Castle is also worth visiting.

Walking inside the ruins of Tintern Abbey

This is one of my favourite castles in Wales, not only for the structure itself, but as much for its location in Caerphilly – surrounded by a moat and rolling green hills in the distance. A setting that makes it look like a true movie-set kind of castle. It was built in the 13th century and today it’s a ruin but partly restored. Its cracked and leaning tower is a dramatic feature, and Caerphilly Castle is one of the best daytrips from nearby Cardiff.

It’s impossible to avoid Cardiff Castle when visiting the Welsh capital, as it is set right in the heart of the city – just a few meters away from downtown’s busy shopping streets, and standing like a historic contrast to the modern Principality Stadium nearby. This asymmetric beauty of a castle was initially built in the late 11th century and later restored, and today it’s one of the touristic hightlights of Cardiff. From the outside the eye is drawn to the clock tower, while the interior hides spectacular decorations in the banqueting room and the Arab room, to mention a few. The neighbouring ‘Animal Wall’ and the castle’s “back garden”, Bute Park, are not to be missed. 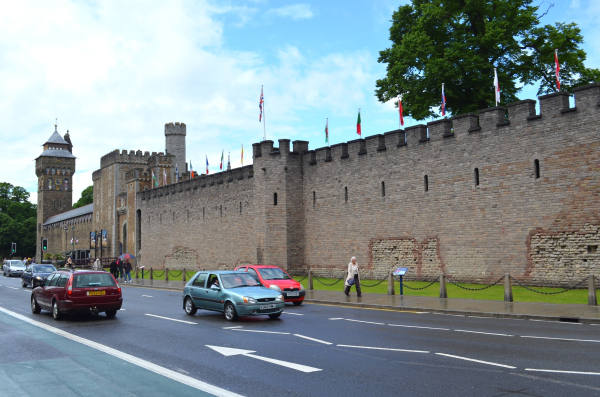 Cardiff Castle standing in the heart of the Welsh capital

SEE ALSO: These 5 iconic buildings will lure you to Cardiff Bay

It’s normally peaceful and quiet around Llandaff Cathedral, which is “tugged away” in the idyllic Cardiff-suburb of Llandaff – a big contrast to the buzzing heart of the capital. It’s an Anglican church from the 12th century, that was heavily damaged during the Second World War, but later fully restored. The cathedral is free to visit and worth it for its unique nave and beautiful wooden ceiling – and while visiting the neighbourhood you should also visit the nearby ruins of the Old Bishop’s Palace.

One of the towers of Llandaff Cathedral

I like the long tradition of pleasure piers around Britain, and after a recent restoration the pier in Penarth near Cardiff is among the most beautiful examples you will find. A Victorian pier that originally opened back in 1898, built in cast iron and wood, and used as a landing jetty for steam ships as well as a promenade for taking a seaside stroll. During the years it was damaged by several colliding ships and a major fire, but today it’s beautifully restored and includes a gallery, an auditorium, a restaurant, and a small cinema, as well as cafés and ice cream shops. A lovely day out from Cardiff.

The pavilion of Penarth Pier near Cardiff

Just a short drive north of Cardiff, this fairytale-looking castle is found near the village of Tongwynlais and the River Taff, sitting on a hill and “hidden” among trees. A gothic-style castle that was almost completely rebuilt in the end of the 19th century and today attracts a lot of visitors to its colourful interior. Castell Coch means “Red Castle” in Welsh, and it’s a nice sightseeing stop between the capital and the Brecon Beacons National Park.

The top of Castell Coch north of Cardiff

This is one of my favourite spots in Wales to sit in and just admire the surroundings. St David’s Cathedral seems to be hidden behind the streets of ”Britain’s smallest city”, which ows its city-status to this historic masterpiece. It was completed in the 13th century, but has been modified and renovated many times since then. Today it’s one of the top attractions in Wales, but you will still be able to visit on a quiet day – or even attend a service. It is set in stones of grey and purple shades, which makes it a nice contrast to the lanscape on the horizon. The neighbouring ruins of the Bishop’s Palace is worth a visit as well.

It’s completely free to visit the remains of this ancient stone structure near Narberth in Pembrokeshire, where it stands overlooking the beautiful scenery surrounding it. It is thought to be several thousands of years old, and that these stones were part of a larger burial chamber. A still surviving man-made structure from the neolithic period, also known as the “new stone age”. The huge capstone on top is 5 meters long and is estimated to weigh no less than 16 tonnes. A similar but smaller burial chamber known as Carreg Samson, can be found further west near the village of Abercastle.

This well-preserved and UNESCO-listed castle is the dominating highlight of the charming town of Caernarfon, which is set on the banks of the Menai Straight, dividing mainland Wales from Anglesey. It stands majestically with its polygonal towers, overlooking the town and the seafront, and is well worth a visit behind its thick walls. A good combination between raw medieval architecture, interactive displays and the intergrated Royal Welch Fusiliers Museum. On a side note the investiture of Prince Charles, making him The Prince of Wales, took place here in 1969.

Inside Caernarfon Castle in North Wales

SEE ALSO: 5 things I love about Caernarfon in North Wales

This beautiful pier in Bangor stretches 460 meters out into the Menai Straight, making it the second longest pier in Wales – and among top 10 in Great Britain. It was opened in 1896 and was once used to receive pleasure steam ships from England and the Isle of Man. Today it’s used as a promenade with lovely views all around – and on the tip you can take a coffee break. It’s free to visit but a small donation is suggested for the upkeep. In fact it’s due to undergo restoration, but will remain open. 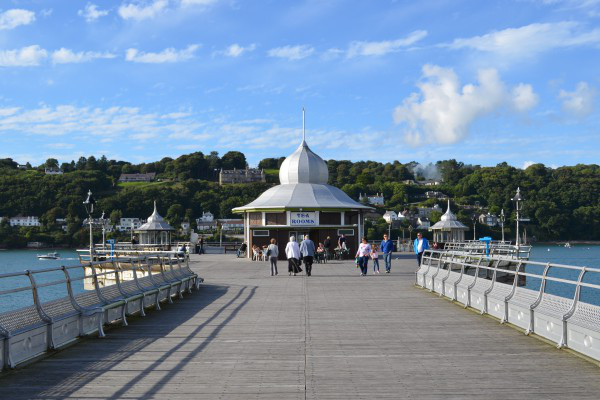 Walking along Garth Pier in Bangor

One of the most spectacular views I have had in Wales was from the towers of Conwy Castle – 360 degrees overlooking the town of Conwy, the wide Conwy River with its bridges, and the mountainous landscape beyond. Simply stunning! This castle is part of the “pack” of UNESCO-listed castles in North Wales, and definitely one of the top castles to visit around the country. It was built in the 13th century and still stands absolutely massive when seen from the road below. Conwy itself is worth exploring as well, with traditional pubs, cosy cafés and The Smallest House in Britain, found near the waterfront.

The view from the towers of Conwy Castle near Llandudno

This iconic pleasure pier takes the title as the longest in Wales with its 700 meters of promenade and amusements – and reaches top 5 of the longest piers in Great Britain. It’s unique in the way that it has two entrances, and it is still able to occasionally receive visiting steam ships. Along the pier the views are excellent back towards the beach front of the seaside resort of Llandudno. Other nearby attractions include the Great Orme Tramway and Conwy Castle listed above.

A quiet Llandudno Pier near sunset in North Wales

As mentioned at the top of the article there are many more amazing structures around the country of Wales, and I hope to add more to my list over the years. Which ones have you visited and which are your favourites? Let me know in the comments below… or on Traveloooney Blog’s Facebook Page.

← Live from… Wales: from capital to coastline
Unique accommodation: Classy, artsy and old school near Brighton →